This name change announcement from Bluebird North to SongBird North concerns the showcase concert series presented by the Songwriters Association of Canada and sponsorship partners across Canada. We asked the Vancouver series’ host, Shari Ulrich, to write a statement outlining the idea behind the change.

“I performed at the very first Bluebird North presented by Amy Sky and Marc Jordon in Toronto almost 25 years ago. Other than Folk Festival workshops, I’d never experienced a song circle and fell in love with the format. In 1995, fellow board member Ron Irving launched the event in Vancouver, and for 21 years now I have produced and eventually hosted the series. When the word came that we would have to change the name, after some passionate whining, I quickly realized, it isn’t the name that makes the event so special, it is the remarkable songwriters from across the country, who say yes to sharing a stage with other great writers and their songs with the most appreciative audiences a songwriter could ever hope to have. Every evening is unique, magical, enlightening and highly entertaining. Songbird North will certainly be soaring long into the future thanks to the vision of the SAC.”

This name change announcement from Bluebird North to SongBird North concerns the showcase concert series presented by the Songwriters Association of Canada and sponsorship partners across Canada.  We asked the Toronto series’ producer, Blair Packham, to write a statement outlining the idea behind the change.
“For more than 20 years, the S.A.C. has presented the regular concert series that we called Bluebird North. A showcase for accomplished Canadian songwriters—four sitting in a row—each performance was unique, but they all shared some key elements: a celebration of the art and craft of songwriting, complete with road stories about hits and misses, and plenty of humour along the way. Decades ago, when I was asked to take over as producer of the Toronto shows, I wanted to change its name because I wanted to make it ours, not a tribute to some place faraway. That didn’t happen for a variety of good reasons, and in the interim, we in the lineup, there would be a good show that night. For the 2017/2018 season at the Royal Conservatory of  Music, we’ve decided to make that name change, but the shows themselves will remain reliably the same: excellent songwriters trading songs and stories, singing, playing and laughing together. We’re calling it SongBird North, as a nod to our glorious past and our promising future, not to mention our Canadian geography, which so often shapes the songs we write and sing.” 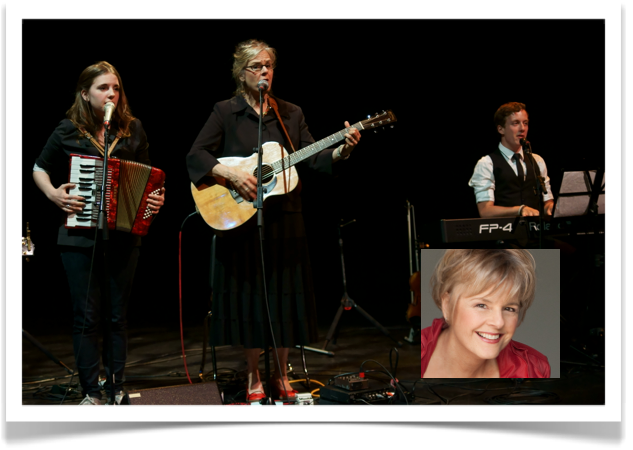 The Songwriters Association of Canada is proud to be the founder of the Bluebird North Showcase that happens across the country – celebrating the songs and stories of great Canadian songwriters.  During these informal acoustic evenings, each songwriter performs their own songs and shares each composition’s back story and inspiration. We’re hosting one in Port Perry on November 3rd and one in Vancouver November 6th.  Originally, published in last year’s annual reference edition of Songwriters Magazine, Bluebird pioneer Shari Ulrich looks back at BBN’s success- ful 18-year legacy, the thrill of discovering an expected gem and experi- encing the alchemy of songwriters connecting on stage.
_______

With Bluebird North, the S.A.C. has created one of the most important benefits to Canadian songwriters possible – providing them with a stage, and helping them foster an audience. That’s the kind of tangible, hands-on advocacy that makes me proud to be associated with the S.A.C.

I was one of the participants of the very first Bluebird North, produced in Toronto for the S.A.C. by Marc Jordan and Amy Sky in 1993. Other than Folk Festival workshop stages, it was my first “song circle” – and I was hooked.

In 1995, Ron Irving launched Bluebird North at the Railway Club in Vancouver, and a year later he handed off the producing duties to me. Aside from a few shows produced by Ron and Roy Forbes, I’ve remained the producer (and, more recently, the host) of the Vancouver event since.

In those early years, our format featured eight songwriters in every show. The most daunting task was booking so many writers, while ensuring at least a few of them would draw a sizeable audience. The downside of having so many songwriters in the lineup was having to restrict each to just three songs apiece. Consequently, over time, the event morphed into a four-songwriter evening.

It took several years, of course, but we’ve finally reached that sweet spot where the draw for audiences is no long a particular songwriter but Bluebird North itself. Our audiences have learned that even if they don’t recognize all the names, they can always expect a spirited and highly entertaining evening, and will likely discover an unexpected gem.

I can never predict how a show is going to unfold but precious few of those 75 shows have fallen flat. If a show did fall flat, it was usually because the host was unable to put people at ease. The song-circle format, after all, can be unnerving for even the most seasoned of performers; it’s just the nature of the beast. A host who can charm those on and off the stage plays a critical role in the success of any show.

We’ve had many homes over the years, and I was determined to take the event out of a bar and into a theatre – more befitting the spirit of Nashville’s original Bluebird Café. It’s all about honouring the song, which is counter to a bar atmosphere. So when Margaret Watts eagerly invited us to the Roundhouse Community Centre six years ago, we knew we’d found our home in their comfy black box theatre (with its spectacular sound).

Bluebird North in Vancouver has become a coveted gig for both emerging writers and seasoned veterans, and not just those based in Vancouver! Being able to provide writers from across Canada a wonder- ful stage with great sound and an enthusiastic audience is a thrill. On the flipside, it means that hundreds of writers are now vying for a relatively small number of spots on stage, which puts me in a position of being the gatekeeper I never wanted to be. But my guiding principle is to keep the quality of the shows as high as possible so that audiences will remain faithful and continue to grow.

It’s been a tremendously rewarding 15 years. The alchemy between writers – their unique combination, the juxtaposition of their work, how they interact between songs and con- nect musically – creates an unparalleled concert experience.

The much anticipated ALL-STAR Bluebird North took place last week at Koerner Hall, where the acoustics of the room took as much of a center stage as the artists that filled the place with magic.  Rarely do we get to hear songwriters with such acoustic clarity and intimacy.

The line-up was truly stellar, featuring Melanie Doane, Suzie McNeil, and Marc Jordan in the first set, along with host, Blair Packham.  Melanie filled the hall with her delicate voice and intimate songs.  She also proudly shared that her daughter also had a gig in a choral performance that night.  Suzie took over with her powerful vocals and stories of healing a broken heart that inspired her latest album.  Marc Jordan unashamedly stated that much money was made from his Rod Stewart Hit, “Rhythm of My Heart,” as he proceeded to enthrall the audience with his own rendition, ending the first round.

To many attendees, the night already felt complete after hearing such inspirational talent.  But the second half continued to raise the bar on the evening with Jane Siberry, Ann Vriend, and Dan Hill.  Each had a distinct voice and story to bring to the table.  Jane Siberry sang songs with a message for the soul.  She also took the audience on a songwriting adventure as she enacted the process of songwriting with a song about vampires.  Ann Vriend brought a fresh sound to the stage with her lively piano playing and lyrical singing style.  Dan Hill shared and sang powerfully about the loss of his father and the reflection that resulted in his grief.  He also sang a song about redemption while sharing about the tragic and violent life of a young person he had watched grow up, who was later shot to death.  Dan ended the evening with a much-anticipated rendition of his famous hit, “Sometimes When We Touch.”  Special thanks to Blair Packham who wove the evening together with his clever banter and songs that ranged from witty to heart-felt.

The evening passed far too quickly.  We could have stayed all night.  We’ll have to stay tuned for the next season of Bluebirth North in the fall…

If you were there, we’d love to hear your feedback.  Please fill out a quick survey – Click Here.