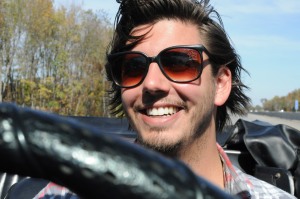 Have you ever thought about quitting your job and pursuing your songwriting with reckless abandon like an uncharted road trip?  While many of us try to balance day jobs with our creative pursuits, Ryan Nolan took a leap of faith and took to the road. His adventures took him to Europe and across North America.  Along the way, he professes he went from simply “writing songs to becoming a Songwriter.”  Here’s a first person account of his incredible journey and what he learned along the way.

I was working a secure and predictable job.  Writing songs when I couldn’t keep them in and had a second to put them on paper. What I really wanted was to write something reactionary – and I need an action to find that reaction.   Last year I quit that secure, predictable job and sold my house. I made sure to buy a new lens for my camera, then I went to the airport and walked from desk to desk asking for a cheap flight to Paris like a high school kid looking for a prom date. I wanted it to feel as though it were a natural progression. Crepes and a bottle of wine to end/start my day at 5am, recreating The Beatles’ infamous “Abbey Road” crossing in London, naps on Amsterdam’s canals while someone more qualified navigated the local water traffic, and absinthe from what I imagined to be the same dirty corner in Barcelona that Hemingway enjoyed it. I bought a guitar in Paris and made it my only piece of luggage, playing open mic’s wherever they served beer. This was my adventure. It was a test run – in a life exactly opposite to what I had known.

It wasn’t long before the adventure needed new life. This manifested itself in the form of a 1968 Ford Galaxy 500 convertible and a road trip from Toronto to New Orleans to Los Angeles. Brief, sun drenched days and the loud, unhealthy grumbling of an old muscle car that just doesn’t know any better. It was my nine to five; my routine. The days were like this, one after another for several months, but the repetition was underscored by obtuse and growing cultural differences as I made my way below the bible belt and across the open country.

It was a trip that decidedly lacked structure, but more importantly, was temperamental. The trip itself was subject to my mood and whim. Stay in one place longer if it suited me, or skip a town altogether. Sleep in my car, my tent, or get a hotel room. Make friends with someone and sleep on their couch.

In my most base state of honesty, I wanted complete control. I wanted to remember what it was like to wake up every morning and make my own decisions. I wanted to play my songs in cities I’d never been to, and record them in places where better songwriters chain-smoked through an entire album.

I’ll admit that I did have a small checklist of things to see and do. a) Eat a Chicago deep dish pizza; b) record something in Nashville; c) catch a show at the Bluebird Cafe; d) get drunk while listening to blues on Beale street in Memphis; e) get even more drunk and listen to as much jazz in New Orleans as my ears could handle; f) see a show at Hotel Cafe in Los Angeles; g) and several other entries that are either irrelevant to this post or inappropriate. Everything in between was a bonus.

I’ve been writing songs since the time I realized I wanted to hold a girl’s hand or tell my parent’s that they were unjust tyrants for not letting me go to the late show at the movies. It doesn’t mean I’m a good, clear or talented songwriter, but it is a part of my life regardless. And while I left everything behind in order to find something new, the one thing I couldn’t let go was the desire to take my experiences, thoughts and reactions and write them down. Maybe it’s because I want other people to relate. Maybe it’s the only way for me to hold onto the part of the experience that falls between the pictures and the stories; the postcards and the emails.  Writing a song is how I package up that intangible element that only comes to life when I recount tales to good friends over a cold beer or find myself uninhibited with people I trust.

At the end of the trip, it was clear that making out-of-character decisions, and changing my patterns wouldn’t be the catalyst for a better song. As songwriters, people discover a particular method of translating what they see and feel into a universal medium. For me, the things I focus on are the people in my life. The rest of the world is easy, but relationships – they require time and effort to navigate and manage. It wasn’t about where I went, it was about the people I met when I got there.

Over the course of the trip I accumulated a few good recordings and assembled an EP, had it printed and put it on iTunes. I play shows wherever I can get them and I take any chance I can get to write with other artists. I never discard a song idea, and I make it a point to write everything down I can.

After seeing so many other songwriters and producers from different parts of the continent, I began to understand that while writing songs by yourself in your spare time is cathartic, even the most extreme folk artists need to write a whole, honest and true song, with their eyes wide open, to feel satisfied as a songwriter. And that’s all I’m trying to do.

Visit Ryan’s Songwriter Profile (and hear some of his songs)