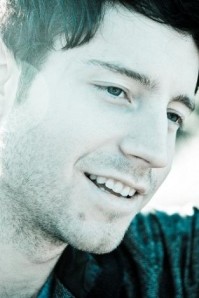 Dan Bremnes released  “Your Strength,” his first full length album last year and already won an award from the “International Songwriting Competition,” and also became a finalist in the “John Lennon Songwriting Competition.”  His songs have been charting on the “Canadian Christian Radio Countdown,” and the album received a nomination for “Modern Worship Album of the Year,” from the Canadian Gospel Music Association.  He also recently won an online “Local Music Search” run by American Christian radio station, Praise 106.5.

Dan’s video for his song, “Beautiful,” is currently being featured on our website, so we asked him to write about his perspective as a faith-based songwriter.  He provided a great overview for his journey and recent success.

I have been writing music for the past 10 years or so. Ranging from punk rock, alternative rock, acoustic pop, to modern worship. I love the thrill of writing a new song and don’t usually sit down with intentions of writing in any particular genre.

Last June I released my first full length album called ‘Your Strength’ The album features 10 songs I have been writing over the last few years. There is a mix on the album, but the strongest feel is that of ‘modern worship’ The record has been distributed nationally by ‘David C Cook’ and is also available online.

I have found being an independent Christian artist not much different than any other genre. Hitting the music scene from every angle possible seems to be the trick.

Radio, social media, YouTube, touring, and networking. All of these work together to create endless possibilities in often unexpected ways.

Radio play has contributed a large part in moving forward. Canada has over 35 Christian Radio stations from coast to coast. Support from these stations has proven to be a huge part in getting Christian CANCON out to listeners.

I’ve spent the last year touring the album to different venues and churches. It has been an awesome journey so far with many lessons and highlights. Most of the places we play are very warm and receptive. It’s been great building quality relationships in different cities/communities and look forward to returning to many of them.

Often times along the way I have asked myself ‘why I’m doing this?’ At the end of the day, we all have to believe in what we’re doing and it just becomes a job if we don’t. I am passionate about music and about God. I’m privileged to be able to combine the two and share it with others, even outside the Christian music scene.

I feel that music has the power to cross over genre’s and speak to whoever is willing to listen. It truly is the universal language and such an honor to be a part of.

Click Here to read Dan’s biography and hear some of his songs.

The much anticipated ALL-STAR Bluebird North took place last week at Koerner Hall, where the acoustics of the room took as much of a center stage as the artists that filled the place with magic.  Rarely do we get to hear songwriters with such acoustic clarity and intimacy.

The line-up was truly stellar, featuring Melanie Doane, Suzie McNeil, and Marc Jordan in the first set, along with host, Blair Packham.  Melanie filled the hall with her delicate voice and intimate songs.  She also proudly shared that her daughter also had a gig in a choral performance that night.  Suzie took over with her powerful vocals and stories of healing a broken heart that inspired her latest album.  Marc Jordan unashamedly stated that much money was made from his Rod Stewart Hit, “Rhythm of My Heart,” as he proceeded to enthrall the audience with his own rendition, ending the first round.

To many attendees, the night already felt complete after hearing such inspirational talent.  But the second half continued to raise the bar on the evening with Jane Siberry, Ann Vriend, and Dan Hill.  Each had a distinct voice and story to bring to the table.  Jane Siberry sang songs with a message for the soul.  She also took the audience on a songwriting adventure as she enacted the process of songwriting with a song about vampires.  Ann Vriend brought a fresh sound to the stage with her lively piano playing and lyrical singing style.  Dan Hill shared and sang powerfully about the loss of his father and the reflection that resulted in his grief.  He also sang a song about redemption while sharing about the tragic and violent life of a young person he had watched grow up, who was later shot to death.  Dan ended the evening with a much-anticipated rendition of his famous hit, “Sometimes When We Touch.”  Special thanks to Blair Packham who wove the evening together with his clever banter and songs that ranged from witty to heart-felt.

The evening passed far too quickly.  We could have stayed all night.  We’ll have to stay tuned for the next season of Bluebirth North in the fall…

If you were there, we’d love to hear your feedback.  Please fill out a quick survey – Click Here. 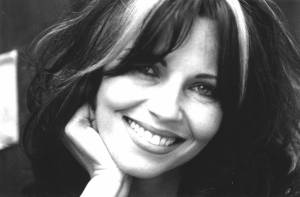 Simona Peron was a back-up vocalist for many years in Italy under the name of Simona Pirone. She toured with Richard Cocciante, Amii Stewart, Mike Francis and sang duets with some of Italy’s most popular artists.

She also released solo albums in Italy, Canada, Scandinavia and the Benelux in the 90s. She also recorded a soundtrack for a famous European TV series called ‘The Climber.’   Here is our interview with her about her journey as a lyricist and how she stays inspired.

1.  How did you discover you were a lyricist?  I started writing my own songs on the guitar when I was a teenager.

2.  How did you find opportunities to co-write?  My first opportunity was with Mike Francis, an Italian artist who had a hit in the UK with a song he wrote for Amii Stewart.  I was touring with him as a back-up vocalist and he asked me to write some lyrics for him.

3.  When you cowrite for other artists, how do you prepare for these sessions?  I am open to any kind of collaboration, but usually I receive an mp3 of the song with a melody and fake words, just sounds. The music inspires a topic. Unless the composer already has one in mind, I usually work on the sounds of the song and juxtapose words on the music that have a great meaning but also a great sound that flows well on the melody and can be sung easily.

4.  What do you bring to the table in a cowriting session?  Usually I have melodies or sometimes I will suggest the need of a chord change at one point or the need for a bridge.

5.  Please tell us about your first song.   The first song I wrote was called “Take me to heaven” It was written in the 80s and finally published this year. Now that’s a story right?

6.  What do you do to keep yourself flowing creatively?  I read a lot . Usually real stories inspire me.

7.  Any tips or words of encouragement for lyricists who are trying to make a go of it, but feel frustrated because they are not strong melodists or instrumentalists? It’s important to sing when you are writing words. The sound of the words are just as important as their meaning. A lyricist is a fundamental part of the musical process. Words in a pop song represent an aspect of the arrangement and are just as important as a bass line or a snare sound or an effect on an instrument. Without disregarding the importance of a message, words in a pop song have the same importance of a melody.

8.  Anything else you think would be helpful to the songwriting community?  Surround yourself with great songwriters and  be open to suggestions. 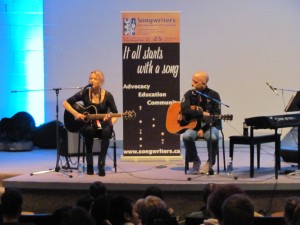 Although young people don’t necessarily understand why they don’t like something, they know what they do like. They are certainly intuitive when it comes to music. The S.A.C. in the school program has brought many songwriter into schools across the country this past year in the hopes of creating a stronger link between these young people and the music creators of the songs they love. On April 15th, the S.A.C. brought Grammy and Juno award winning songwriter Dan Hill and PEI singer/songwriter Chastity into Colonel Grey High School in Charlottetown to talk about songwriting, perform some original songs and answer some questions about songwriting and the music business.

Both Dan and Chastity played songs that were powerful and emotional and allowed the audience of 70 students to learn more about how these songs were created and why. Dan played a song called “My father’s son” that depicts his struggle growing up and trying to impress his father, which story has been immortalized in his latest book called “I am my father’s son”, a memoir of love and forgiveness.  After he played that song, and everyone recovered from their emotions, he also played some of his other hits that have been recorded by other artists. Chastity played some of her original songs including some recently written pieces. Both Chastity and Dan talked about co-writing as being a way to expand your writing ability and horizons. Some young songwriters stayed afterward to talk to Dan, Chastity and I and they were very inspired by this event and hoped to do more collaboration because of it. In fact, these same students vowed they would start up a songwriting to offer others a safe place to create and learn from other writers. What a great way to meet young people….through music.  Both Dan and Chastity performed at the Bluebird North showcase the following evening along with several other artists.

For more information on the S.A.C. in the Schools program, check out www.songwriters.ca